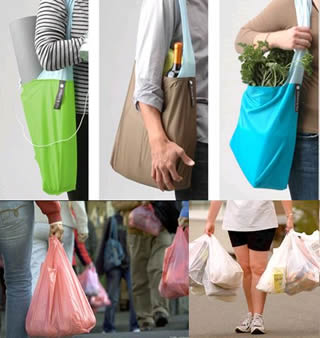 Plastic bags, especially the single-use ones, are slowly leaving us. The good news is that this is happening, the bad news is that the process is too slow and they continue to harm our economies, health and environment.

Since their introduction in the US in 1957 they have expanded all over the world and now they can be found everywhere; oceans, rivers, mountains, fields, cities, homes… everywhere. The reason for their success was that they were cheap, light, higienic, resistant and the reason why they should be phased out is because it is not true that they are that cheap; it is just that their producers were not bearing the costs, people are. The costs of cleaning the cities, seas and fields, the costs of floods that plastic bags cause when they block the draining systems, the costs of fixing the machines blocked by plastic bags in the waste separation plants, the costs of loss of biodiversity because of death of animals by suffocation or contamination, the health costs of having more and more plastic in the food chain, the costs of tourism not wanting to come back to a country where there are more plastic bags than birds in the air… all these and many more are costs that the society is bearing and this is why the end of plastic bags is near. It doesn’t make either economic or environmental sense.

So, what are the experiences in Europe to reduce the consumption of plastic bags?

Ireland
The most successful example in Europe is Ireland which introduced a “PlasTax” in 2002 –law 605/2001 – of 0,15€ per bag and managed in only 6 months to reduce the use of single-use plastic bags in a 90% and which created a revenue for the state of 19 million euros. The tax is applied in shops, supermarkets and other public places and excludes the reusable bags sold for more than 0,70€, the small bags containing bulk meat, fish, ice, fruits and vegetables and the bags in planes and ships. Infringement of the norm is sanctioned with fines starting from 1905€. The BBC reported that in three months after the ban was introduced, shops handed out 277 million plastic bags fewer than normal.

France
On the last January 1st entered into force a ban on the selling of non-biodegradable plastic-bags, the fine for violating the law is of 100€. According to a survey from WWF in 2005, 83% of the french were in favour of banning single-use plastic bags in supermarkets.

Denmark
As part of a larger packaging tax introduced in 1994, Denmark taxes plastic bags. The stated aim is to promote the use of reusable bags. However, the tax is paid by retailers when they purchase bags, rather than by shoppers, yielding less dramatic results than the Irish PlasTax, which charges consumers directly for each bag used. Still, consumption of paper and plastic bags has declined by 66%.

Spain
The region of Andalucia has  recently approved the first-ever in Spain tax (5 eurocents) on single-use plastic bags to be introduced in 2011. With a population of 8.3 million people Andalucia could raise 100 million euros next year, and twice as much when the tax will be doubled in 2012. Other autonomous regions in Spain such as Catalonia have targets to reduce single-use plastic bags but no measures -tax or ban- as to how to make this happen.

In other countries such as Germany, Belgium, Italy, Netherlands or Hungary the big supermarkets charge for the plastic bags.

Several initiatives and campaigns are taking place in different parts of Europe in order to push the authorities to act against plastic bags. There is no concrete EU policy regarding plastic bags.

If you happen to know other campaigns or policies against plastic bags in Europe please let us know.

Phasing out plastic bags in Europe and replacing them with reusable bags is part of a Zero Waste Strategy in Europe; it reduces waste, it reduces costs, it promotes sustainability and is good for the environment and our landscapes.

To conclude we leave you with the video of the life of a plastic bag that is used to push the ban on plastic bags in California: